The Empty Pickle Jar - Thought for the Day

The Empty Pickle Jar
Posted by Ed Kugler at 10:52 AM No comments:

Email ThisBlogThis!Share to TwitterShare to FacebookShare to Pinterest
Labels: Inspiration 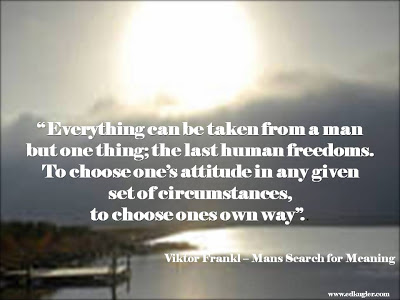 Viktor Frankl speaks from personal experience. A survivor of the German concentration camps. Each of us has a choice in every circumstance to choose what we may do, how we may feel and how we might respond. Never forget that is a gift from God. Use it wisely!
Posted by Ed Kugler at 10:13 AM No comments:

What does it mean to be 'in' Christ? Christ is Christianity. He epitomizes good. He is the ultimate example of living and dying for others. If we are 'in' Christ we must try and live as best we can by His example. Do we?
What does it mean to become a 'new' creature? None of us can match the daily behavior of the Savior of mankind, Christ, but we can try. We can get up each day and become new in our behavior towards others. The battle in life is not that I might become better than you; the battle in life is that I reach my potential in Gods eyes. What did I do with what I was born with? That is the opportunity we have to become better, to become new.
What does it mean that 'old things are passed away'? As we change our behavior we leave the old behind and we become a new person. We can not move to a new destination without leaving the old. I have a close friend from my Nam sniper days who spent twenty years riding with a bad biker gang. He went through three wives and many bad things but today he has been married for twenty years, is a business owner, raises expensive horses and has put the gang long behind him. How did he do it? He sold everything he had where he lived, moved across the United States and started over. He told me he had to leave his old haunts and old friends behind or he could never change. His 'old things' passed away. Yours can too.
What does it mean 'all things become new'? When we choose to change the way we are and actually implement those changes in our lives, we can become new people. My friend surprised us all by becoming so much more than we would have ever given him credit for had we not seen it with our own eyes. You can become new, in Christ by making the changes in your life that emulate Christ example.

Who are we? In the end ... we are who we choose to be. Whether you believe in Christ or not, you can become new. You can choose to put the old you behind and become new. I believe we should follow Jesus Christ, you are free to believe as you will. Becoming better is open to all of us. Each new day is a new beginning. Each choice is a change for change.
In the end we are as we behave. A saying I love and committed to memory is, "What we do each day is what we believe, all the rest is just talk". What believe shows each day in the choices you make which results in behavior people ultimately interpret as you. You decide.

Improving the World by Improving Ourselves 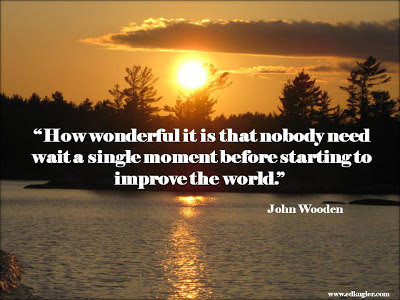 Think about that. Each of us has the opportunity to improve the world each day with each choice we make. The question is ... will we?
Posted by Ed Kugler at 10:12 AM No comments:

We’ve talked about becoming better by realizing we each live with a circle of influence and a circle of concern. We then learned to have the drive to change we must find our own burning platform. What drives you to change, to grow and be different than we are today? Hopefully, you find your motivation to become be A tter people and work to make a difference in our nation, our work and our families.
We live in difficult times in our nation. We can and should look at our problems as being caused by two different reasons. First, if you’re a God loving person you understand that as a nation, as a people in this nation of America, we have collectively turned our backs on God. The second and equally important reason, which even people who reject God should see, is that we have turned our backs on the principles that made this nation exceptional for many years. Both of these reasons spell doom for America.
How serious is our situation? Why is it time to act? Lets briefly look at three recent headlines reflecting the changing values in leadership.

So what does this have to do with our becoming better people? Everything. The time is now to work in your circle of influence being driven by the biggest burning platform of all, America’s impending demise. We need to be people of character even if our President, his aides and most of Congress aren’t men and women of character. If we believe America to be the greatest nation on earth, founded on doing right, founded on the principles of honesty and integrity, then it is time we act in a way everyone can see it.
There are a few simple things I believe would help and they’re all well within your circle of influence.

Three simple things we can all do everyday. If you have no interest or think you have no time, then its simple, you’re part of the problem and not part of the solution. The time to act is now. Every single day we drift further out in the sea of oblivion. We may not be able to turn the tide and return the ship called America to port ... but we’ll never know unless we try.

The Key to Your Future 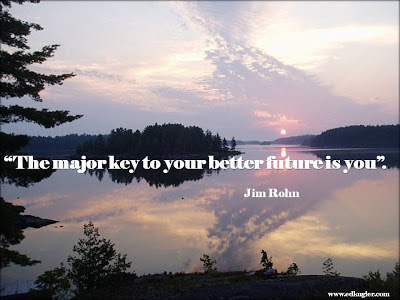 Each of us must look in the mirror every now and then and have a stop kidding myself day ... where are my present practices taking me? In that answer lies the key to your better future!
Posted by Ed Kugler at 8:48 AM No comments:

Email ThisBlogThis!Share to TwitterShare to FacebookShare to Pinterest
Labels: Actions to Take, Be the Change

The Power to Choose 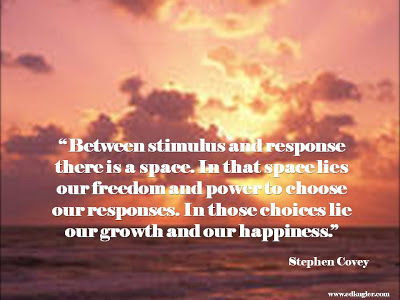 Putting the Circle of Influence into Action

When I first heard of the Circle of Influence I was working for Frito Lay. I'd just taken a position that moved us from Dallas to northeast PA where I would be in charge of several logistics locations. One of our locations was based in south eastern New York State. It was a problem child for the company.

Before leaving Dallas for my new assignment my bosses bosses boss called me in for an early morning meeting to discuss the problem. He told me that the particular site in New York had been having union elections for the Teamsters every year for the past four years. It was costing the company over a $100k a year to fend them off. His message was simple. "Kugler, I don't care what it costs me, never have another union election again". That was pretty straight forward.

My Dallas boss gave me some parting advice. He said, "Call Stephen Covey, he'll advise you on how to do that". At the time I hadn't heard of Stephen so I checked him out. At the time Stephen was getting $10k a day to come and advise so I opted for his number 2, the late Blaine Lee. He flew up to meet me the next week.

Over breakfast I explained my 'problem' and Blaine listened intently. At the end of breakfast he said, "Do you know what your problem is?" I said, "No, thats why you're here". He took out a new napkin from the table and looked at me, as if to say, 'hope you can take this?. He drew two circles. A large one and a smaller one inside the large one. Then a painful, life changing lesson began.

He looked me in the eye and asked, "tell me once again why you have union elections every year". So I began my littany of what were excuses. I said our rotten HR (Human Resources) department always rides in on their white horses and saves the day creating Pavlov's Dog for next year. I told him of HR's lack of support for logistics and their lack of interest in logistics until something happens. I went on and on and on as I had all during breakfast.

Each time I told him one of my many excuses he would put an X in the outside ring. After some time of my ranting he stopped and said, "You see these X's?" I said I did. He said all those problem you describe are interesting but not relevent. He taught me that while each of those things may be true, which he doubted, they weren't relevent because I had no control over them. I was not working within my circle of influence.

Then he forced me to answer for what I could do. What was in my circle of influence? I would answer and for some time there was another X in the outside cirlce. Finally at his urging as to what I could do to have a better relationship with our HR folks I said, "Eventhough they do not come to our driver meetings on Saturdays I could have minutes of the meeting and take them over, sit down and review them". I finally got an X in the inside box. I began that day to learn. It was a painful lesson.

Blaine said to me, "You're the problem". He meant just not me but prior logistics management at that location because we always saw the problem as being 'out there' and not in our control. That single lesson I took to heart. Over the next four years we did not have an election and my relationship with HR locally and in headquarters was changed completely. Where there was no trust there was high trust. And you know what, the only thing that changed was me!

Each of us needs to apply this lesson to our present circumstances. Each of us needs to look in the mirror and be honest about what we have been doing about America's problem. What role did we have to play in America's current demise. For instance, the fact that we have a Congress full of elitist who think they are above us ... is interesting, but not relevent. What is relevent is what we can do about it. What is in your circle of influence?

For starters did you vote in the last election for Congress? Did you support the opponent of the elitist in your area? Do you pray every day, morning noon and night for this great nation? Those are all things that are in your circle of influence where we can make a difference and not an excuse. If we want to be ready for the new America ... we must learn to operate every day within our circle of influence and become part of the solution, not part of the problem.

Remember, one person can make a difference. If it is to be ... it's up to me!

Do You Want Solid Relationships?